Washington is full of Memorials for past presidents and powerful leaders. These monuments speak volumes about the character and tenacity of the leaders who shaped the destiny of the US and to some extent the world.

Well known and less-known facts about few US Presidents

George Washington – First President of the United States. The only president in American history to be elected by unanimous approval.  He was considered to be a man of great personal integrity, with a deep sense of duty, honour, and patriotism. The US was a small nation with 11 states and approximately 4 million people when Washington took office. He was so strong that he could crack walnut shells between his thumb and forefinger. The US now is a nation with 50 states and a current population of 328 million people.

Abraham Lincoln – The failures, defeats, and adversities of his early life were transmuted into a degree of intelligence. Lincoln had that rare trait to turn on more will power instead of quitting when the going was hard. We visited Lincoln’s memorial in the morning, soon after we reached the Union Station and again at dusk with a tour group. I was amazed by the number of people who visited this memorial. People from all walks of life made a pilgrimage to this site regularly.

Thomas Jefferson – He was a draftsman of the Declaration of Independence and the 3rd U.S President. He sold his collection of around 6,000 books to the Government to inaugurate the Library of Congress. The Library that stands today is a colossal treasure of rare and valuable books. The Library is the living proof of the intellectual capacity of a man that Jefferson was. I cannot imagine any single individual could have a collected so many books so long ago.

John Kennedy – Very charismatic leader, who had a vision for advancement in science, especially that Americans should land on the moon. His famous quote to the American people, “Ask not what your country can do for you; ask what you can do for your country”.

Martin Luther King – He said that “Shallow Understanding is worse than Misunderstanding”. He donated his Noble Peace Prize money to the Civil Rights movement. His famous freedom speech “I have a dream” had a powerful effect on people’s lives. As a Baptist Minister and Activist, he had delivered powerful speeches. Some of his famous quotes appear in the memorial.
“Injustice anywhere is a threat to justice everywhere.”

I visited a few countries in Europe and Asia before I visited the US. The respect and homage people pay for their past presidents and leaders are not found anywhere in the world. Monuments in Washington are the testament of this fact.Visitors take pride in paying tribute to the leaders in large numbers, honour and remember them for the sacrifices they made to build this wonderful nation.

Last year, we were in London for a week in August to attend my nephew’s wedding. My
cousins who attended the wedding made plans to visit Dover Castle and Canterbury  Cathedral. Although I have visited Dover Castle before on two occasions, I didn’t get the opportunity to visit the bunker and the hospital.

On our way to Dover, my cousin was talking about the bunker and the rescue operation undertaken by the Royal Navy. As we entered the underground tunnel below the castle, the sound and lighting effect in the background was so immerse, the exposure was like reliving the World War II. The war time sirens and emergency evacuation announcements relayed over the radio during the war seemed real.

“Operation Dynamo Rescue from Dunkirk” (Period 26 May to 4 June 1940) was to
evacuate British and Allied forces from Nazis Germany from the port of Dunkirk
in France to Dover Castle in Britain.

Distance between Dunkirk, France and Dover port is about 21 miles. German forces started shelling the allied forces on the beaches of port Dunkirk, when allied forces were
waiting to be rescued by the British Navy.

Captain Ramsey was the mastermind behind the “Operation Dynamo.” They rescued
more than 330,000 troops from the German forces, roughly 85% of the allied forces.

The underground hospital is basically a hospital ward which was used for the treatment of wounded troops of war. It’s in the tunnels beneath Dover Castle, close to “Operation Dynamo” tunnel.We experienced the sounds and atmosphere of the World War II hospital, with its operating theatre. Several rooms below showed the life of the doctors and nurses during this period.
One of the audio recordings said that at the height of war utmost secrecy and security was maintained throughout the hospital ward. People who played major roles in the hospital are dead now. They couldn’t get the exact information on the happenings in the hospital.

Dover Castle is a medieval castle in Dover, Kent.
We limited our time to explore the castle and its surroundings. We climbed the spiral staircases and ascended to the roof of the castle, where we enjoyed a beautiful view across the entire grounds.

Last year we travelled to New York to see our daughter. On our way to New York we stopped over in California for a few days. The weather was warm and beautiful, similar to Sydney weather.

We travelled on a 60-minute sightseeing cruise around the Statue of Liberty, Ellis Island and under the Brooklyn Bridge. The tour guide who accompanied us,said that because of the sheer weight and height of the statue, it was brought in parts by ship to New York from France and reassembled to make the statue as it stands to-day. The carpenter who was given the task of creating the design in France, couldn’t find a suitable face and was compelled to sketch his mother’s face for this remarkable statue.

Located in the Midtown area of Manhattan in New York City

A memorable place visited in Washington was Abraham Lincoln Memorial. Lincoln attended a performance at Ford’s Theatre in Washington on Good Friday, April 14, 1865 and was shot on his head at the theatre. The surgeons believed that he wouldn’t survive a carriage ride back to the Executive Mansion and not wanting him to die in a theatre, carried his limp body across the street to a boarding house where he died later. Both the theatre and the boarding house attract visitors daily. 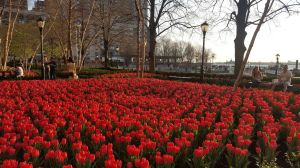 ” A Journey of thousand miles begins with a single step” – Chinese Proverb.

Our first trip to the United States was in April 2017 to see our daughter in New York and travel around. My first visit to the 9/11 site reminded me of the destruction and demolition happening around the world. Loss of valuable innocent victims, loss of a large number of fire servicemen in the neighbouring fire service station and the destruction of twin towers -the land mark of New York City, are signs of evil forces in existence in the world.

With a heavy heart, we went to a nearby cafe. I could see beautiful red tulips in full bloom at a distance, which I caught in my cell phone. Nature brings out her best in creating beautiful flowers and creatures. Plants, animals, and birds blend well with nature and are at home in their environment. Humans are disoriented and do not blend with nature, but are endowed with creative powers to create their own environment. It’s sad to note that this creative power is used ruthlessly to destroy the beauty of mother nature.